Before and After: Home Office in a Closet, revisited

One project I was excited to work on this summer was helping a woman with her home office in a closet. Having a home office in a closet can be a GREAT use of space! She’d set it up for herself some time ago, but it really wasn’t working for her any more. It needed to be revisited, both for its function and its appearance, so that she could really embrace it and use it for all it is worth, once again.

First, we did a “Twenty Minute Attack,” set the timer for 20 minutes to see what we could accomplish in a laser-focused way. We we went through and tried to grab everything that we knew she no longer needed:  trash, recycling, etc.  We took a little longer than 20 minutes, because we were on a roll, and could see the end in our sights.  We gathered up a bag of each, and then set back to decide what the space REALLY needed, now that the distraction of the trash was gone.

A few observations I made led to some big discussions:

Here are a few photos (the “Before” photos are really “During” photos… they were taken after the Twenty Minute Attack) of how the transformation came about): 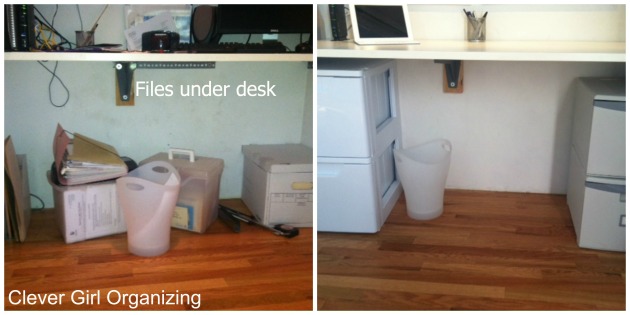 Clever Girl Organizing® works with clients in their homes or offices to transform their space and systems, minimize stress, and maximize efficiency, productivity, and serenity! Her superpower is helping people untangle their relationship to their stuff!

Twenty Minute Attack: The best friend of an organized home

Emergency Preparedness Month: When Being Organized Can Help Save Your Life.

In Defense of The Piler

No matter how warm or cold it is where you are, it's Spring! Here in Boston, the weather is turning warmer, the days are getting longer, it stays lighter a little later, and... it's showing us all just how much our home could use a good cleaning! If you're like a lot...

Are You Ready to Get Organized in 2022? It’s Time for the Challenge!

How to Find Your “No” and Find the Peace Behind it

Shrewd decision-making is at the root of success in life. At its core, it comes from knowing when to say "no" to the thing that isn't right for you. Saying "no" can be a really, really, hard thing to do, and so many people don't feel great about their ability to do it...